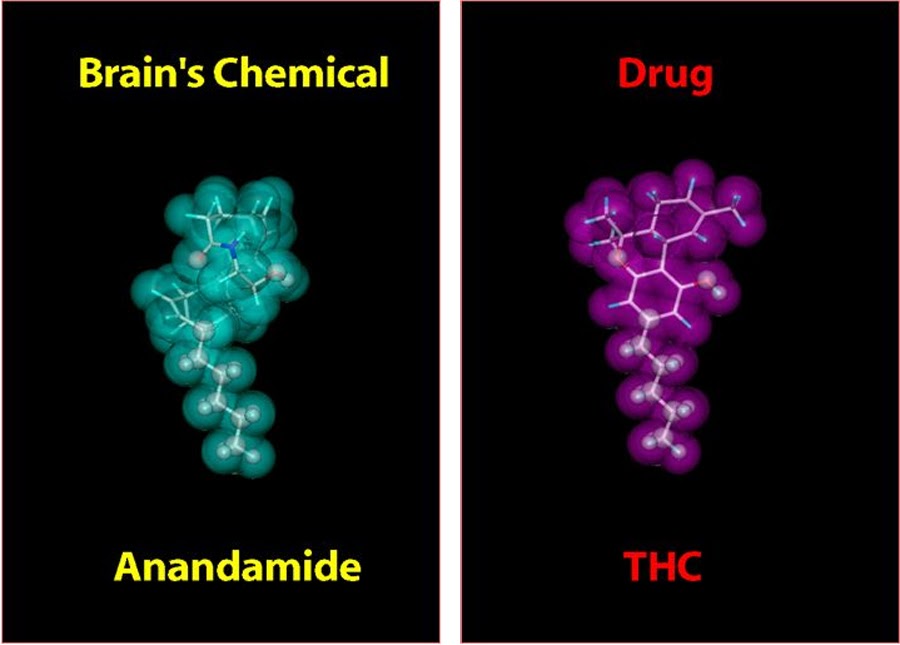 You’ve probably heard your fair share about CBD and all its health benefits by now. That means you’ve also heard about the Endocannabinoid System (ECS) and have a slight understanding of how it works, even though you probably also just found out that it existed. You’ve probably also heard quite a bit about anandamide, or as it’s affectionately referred to as the bliss molecule.

Before all this talk about CBD, THC, the ECS, etc. came about; anandamide was the force behind the elusive “runner’s high.” Now it’s something that we understand is our body’s very own form of THC, or more simply put, a natural molecule that makes us feel good inside.

In this article, we’re going to talk more in-depth about anandamide, how it makes you happy, and how CBD can increase its levels within your body.

Anandamide is an endocannabinoid whose name originates from the Sanskrit word ananda, meaning “bliss.” Endocannabinoids are the natural cannabinoids that are produced via the ECS. If you’re not familiar with the ECS, here’s a crash course:

The ECS is the system within our bodies responsible for regulating all other systems. That means immune function, appetite, mood, pain, thermoregulation, muscle control, motivation and reward, metabolism, energy, and so on. The ECS itself is comprised of three fundamental components: endocannabinoids, cell receptors (CB1 and CB2), and enzymes. (We’ll get into that later.)

Think of your ECS like a highway of neurotransmitters, with the endocannabinoids being the messengers between two or more destinations. Anandamide is specifically involved in the delivery of a neurotransmitter similar to endorphins, dopamine, and serotonin. It works primarily as a natural anti-depressant and a mood-enhancer.

Anandamide also works to reduce sensitivity as well as stimulate appetite and mitigate the immune system’s response to hyperactivity and inflammation.

What Does This Have to Do With Cannabinoids?

The anandamide function is very much related to THC in how it binds with the body’s CB1 receptors. However, it’s not as potent as THC. Therefore, the endogenous painkiller is amplified by the cannabinoid. That’s why there is so much success in using medical cannabis to relieve chronic pain.

CBD also influences the bliss molecule—but in a slightly different way. If you’ll recall, the ECS has three components, one of them being enzymes. The fatty acid amide hydrolase (FAAH) is the enzyme created by the ECS. Its purpose is to destroy any “left over” endocannabinoids sent out to a system. The purpose of this function is so that the new balance  is not disrupted by a surplus of endocannabinoids. Pretty cool, right?

CBD inhibits the FAAH enzyme function, which allows the anandamide to stay active for longer. In turn, the bliss molecule gains potency so it can relieve pain, inflammation, anxiety, depression, stimulate the appetite, and help with other conditions.

Interestingly enough, many of the conditions that CBD helps to manage and treat may have something to do with what scientists are calling Clinical Endocannabinoid Deficiency (CECD). It’s human nature to follow our bliss. Unfortunately, that usually leads to overstimulating the ECS. This is especially true when it involves poor diet and exercise habits, excessive drinking, and the use of drugs.

Overstimulating the ECS is what throws off its natural balance. It directly affects our levels of anandamide, which, of course, affects how we feel and how we function.

If you’re feeling overstimulated and off-kilter, Dr. Strains CBD has just what you need. Visit our online shop and view our selection of CBD hemp products or contact us to see what we have in store.

The Endocannabinoid System: A Simple Guide