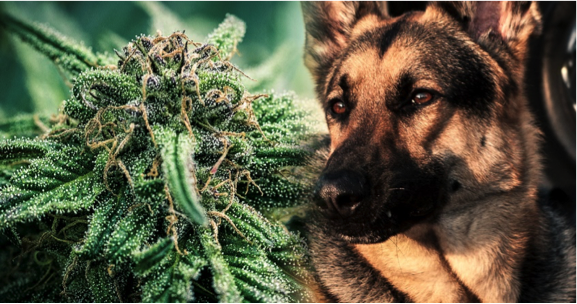 With a similarity in smell to the illicit drug, marijuana, trained police dogs can’t tell the difference between the two. They will alert on or react to both correspondingly.

After the legalization of the plant in 2018, delivery truck drivers would expect a trouble-free journey to their destination across the country, but, instead, have an encounter with the police and on occasion get arrested because the officers couldn’t tell the difference between the legal plant, hemp, and the illegal plant, marijuana given the fact that the two plants are similar in appearance.

How can the police tell them apart?

The only way to distinguish between the two is by measuring the THC content, but officers don’t carry that kind of technology around with them.

Also, field tests are quite outdated as they solely test for the psychoactive chemical compound, THC, found in high amounts in marijuana, while hemp, by design, contains little to almost no traces of THC, but not enough to make it illegal (< 0.3%). Nevertheless, the tests will come back positive resulting in the arrest of the possessor. To prevent unnecessary arrests, they will need a special type of technology sensitive enough to distinguish between the two.

In some states, such as Idaho, South Dakota, Mississippi, and the District of Columbia, hemp is still illegal, especially the cultivation of it. This is the reason for some of the arrests when transporting hemp across the borders. On the other hand, in some states where hemp is legal and they already have their own hemp programs, they are faced with the disadvantage of waiting months to get approved by the U.S. Department of Agriculture (USDA).

As the industry grows and becomes more popular, it’s important to have some form of rules to distinguish between the two plants.

The ideal plan is to have the USDA implement rules for validating hemp shipments that local law enforcement can depend on instead of THC field tests. One attorney based in Colorado who specializes in such cases, along with other individuals, has suggested state agricultural certificates or lab certificates, eliminating unnecessary arrest and rightfully arresting the unlawful.

Of course, this is a cause for concern for hemp business owners and delivery drivers and is potentially bad for business as it could result in the delay and even the loss of product.

Most state laws allow for hemp-derived CBD products, thanks to the 2018 Farm Bill loophole. So long as the CBD products contain less than 0.3% of THC, it’s legal. But, as NBC Washington reports, it’s “unclear whether major law enforcement supply manufacturers are working to develop a test that can distinguish between CBD and marijuana.”

However, it is likely to take time, to develop an accurate test as it will not only need to work, but will also need the support of the government and the police.

Bloomberg – Legal Hemp or Illegal Weed? Police Are Having Trouble Telling the Difference

Hemp.in – Police can’t tell the difference between hemp and marijuana